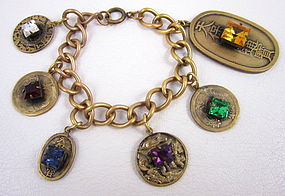 Please refer to our stock # 11162 when inquiring.
Click to view additional online photographs

This fantastic bracelet was made by legendary costume jewelers, Joseff of Hollywood. Known as the leading suppliers of jewelry for early Hollywood, they also produced a line of jewelry that was sold through exclusive retailers. This bracelet is 8 1/4" long from end to end x 2 3/4" wide at the largest charm. It is made from brass and has the company's signature matte finish which was originally produced because it wasn't reflective under the early Hollywood film lights. It has a variety of faceted square rhinestones set on faux Chinese coins. It is in excellent condition and is signed "Joseff" in script on the reverse.