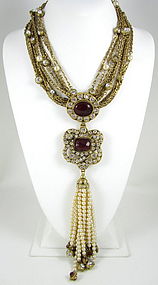 Please refer to our stock # 10932 when inquiring.
Click to view additional online photographs

This stunning necklace is one of several pieces we acquired from an important private collection that is currently deaccessioning. After months of negotiation, and renegotiation we were able to acquire this necklace which was purchased by it's original owner at 31 Rue Cambon in 1984. It is a design originally rendered by Robert Goosens and reissued by Gripoix for Chanel at the beginning of Karl Lagerfeld's reign.

It has a wearable length of 17 1/2" and drapes down approximately 9 1/2" from the top of the center medallion to the bottom of the tassel. It is hand crafted from gilt brass and has red gripoix glass on the two medallions and bottom dangles. The luminous glass pearls on the neckpiece and tassel are spotted with dozens of brilliant clear crystals. It is in excellent condition and is signed "Chanel 1984" on the reverse.

It comes from the grand period of the atelier's designs where logos were not important in identifying great style. A seasoned collector will immediately recognize it as "classic" Chanel, and the novice will simply know it's jaw dropping. Either way, you can't go wrong. The estate and heirs have researched the necklace and have verbal confirmation from the company that it is most likely one of a kind. Don't miss out, as you may never see another.